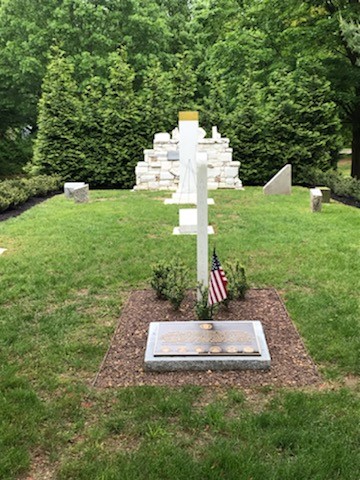 Update as of September 3, 2016
Over the past few months significant progress was achieved on the American Legion Centennial Memorial being constructed by Post 76. In addition to the Ceremonial Groundbreaking with West Windsor Mayor Shing-Fu Hsueh and Council Member Alison Miller, the first major element was completed. The Stone Wall with a quote from the work of American poet Walt Whitman, was constructed by sculptor Pietro del Fabro and masonry contractor Earl Groendyke. We anticipate the next main element, a seven-foot tall Danby white marble cenotaph, will be installed within in the next two weeks.
We remain on schedule for the formal dedication on Veterans Day, November 11, 2016, and thank West Windsor Mayor Shing-Fu Hsueh and the Township Council for their help and support on this project.

Memorial To Veterans Announced For Site In West Windsor
West Windsor, NJ – May 5, 2016 - American Legion Post 76 Commander Bob Cox has announced plans to create a new memorial located on the lawn near West Windsor Township Hall in honor of its members in West Windsor, Princeton and the surrounding communities. The dedication is set for Veterans Day, November 11, 2016 in recognition of a century of service and a commitment to citizenship by the membership of American Legion Post 76, first chartered in 1919. “I would like to thank West Windsor Mayor Shing-Fu Hsueh and the Township Council for their help and support in developing this
project,” said Commander Cox.

Commander Cox and Adjutant Michael G. McMahon have worked with designer and sculptor Pietro del Fabro to create a memorial plan that will honor all veterans and especially the members of Post 76, for their patriotism and sacrifice. The project will include a marble cenotaph and wall on which families and friends may incise stars in memory of deceased veterans.

The two main elements of the memorial are a seven foot tall cenotaph and an adjacent stone block wall. The cenotaph is made of Danby white marble from Vermont. The wall will be constructed with a mix of marble, limestone and granite blocks. Princeton University has generously donated stone blocks for the wall construction.

“We are very excited about the unique design of the memorial and the way in which it will include members of the communities who wish to participate in honoring our veterans,” said Commander Cox. “We see this memorial as a special opportunity for remembrance and reflection.”